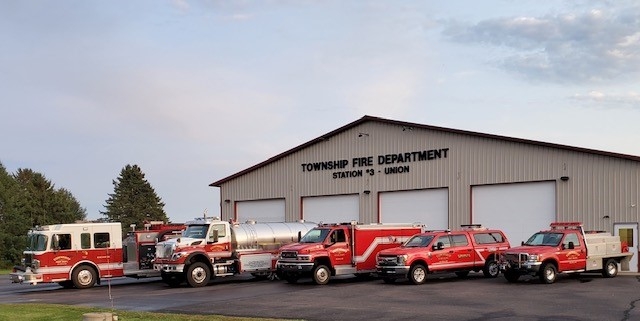 The Town of Union Fire Station was organized in 1955 with a roster of 40 members. The “station” was located in Ken Freitag’s garage 3015 Truax Blvd. A 1943 Chevy was the first fire engine in Union and was purchased in 1956. Two years later the “station” moved to Lawrence Bushendorf’s garage 1710 N. Clairemont Ave. (now NAPA Auto). The next station was located at 2222 W Cameron St on property donated by Kermit and June Walker in 1958. This building was ready for use less than a year later in 1959.

New and more equipment resulted in overcrowding of the station. In 1982, two additional equipment bays and a meeting room were added. Construction was done by the volunteer firefighters, so the only cost to the tax payers was the materials. Twenty years later (2002) the capacity of the station was again exceeded and an additional storage unit was built which houses the dive rescue trailer and boat. They have again exceeded the capacity of their present location and a new station is in the planning stages.

Union Firefighters rely on fundraisers to provide additional revenue: aluminum cans are collected at the station, and in the spring and fall, contracting with the Town of Union for brushing town road-right-of ways.

Today, station 3 has a roster of 35 firefighters. In addition to basic fire fighting techniques, many fire fighters choose to receive emergency medical training to become members of Emergicare (medical first responders) and training in Specialized Rescue techniques. Their apparatus inventory includes one engine, one water tender, one rescue truck/mini pumper, one brush truck and a dive/swift water rescue equipment trailer and boat. Three Defibrillators (two defibrillators donated by Norma and Jim Severson, and one donated by the Dumond & Alf Family’s and the Town of Union Fire Fighters) are a part of their inventory. A trailer for civilian and firefighter rehabilitation was added in 2019 and a new 3500 gallon water tender was placed into service in 2020.

The need for firefighters is always great. Please consider joining the fire department and helping neighbors in a time of need. Applications can be found here: TFD Application. Download/view the newest fire department recruitment flyer here.

The eastern and northern portions of Union are not only urbanized, but also industrial and bordered by State & Federal highways resulting in numerous responses, especially during winter weather events.